all my Muslim ladies

I need to take a few minutes away from witty jokes and clever analogies to talk about the women in Syria. I was really affected by them in Aleppo and it's worth a quick mention. It was difficult to write about that trip because my usual style would belittle a situation I feel strongly about. Bear with me.

It seemed that every women was covered in some way (save the tourists whose naked heads stood out like broken thumbs). There were a few ladies who wore headscarves and conservative western clothes, but the vast majority had only their faces showing, some only their eyes (often with thick eye makeup, weird). A few spooky gals floated through the streets without a speck of skin showing. They had their faces covered under their veil and wore gloves. If the invisible man is real I bet you he is laughing and living in drag in Syria. 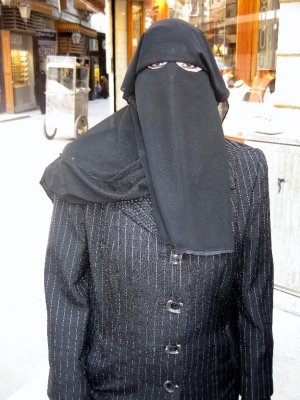 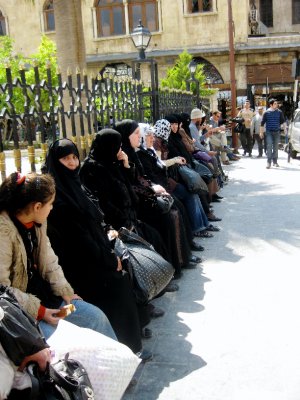 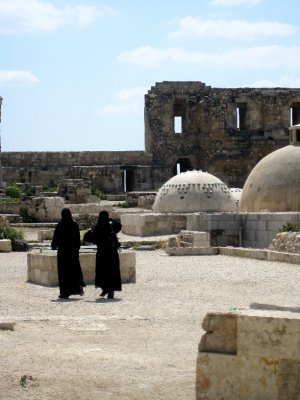 Despite the oppression of their attire, however, was the apparent freedom women had in society. One night Em and I were coming back from a lovely dinner in a beautiful old mansion and were shocked to find women everywhere! In Turkey this would never happen - after the sun goes down it's a dude's world - but in Syria there were ladies and children crowding the streets with no sign of tiring. Perhaps the implicit dress code affords Syrian women social freedom after all? 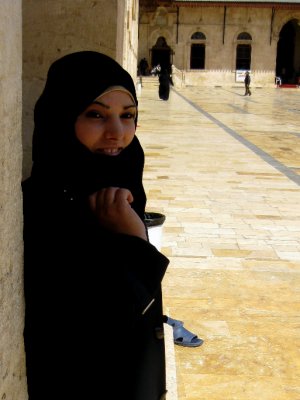 I wish my optimism had lasted, but sadly on my solo trip back to Turkey I had a negative reaction, mostly in part to the temperature. It was extremely hot. We are talking 35+ before noon here. I am not a delicate flower by any means but I was seriously suffering. I was delirious, panicky for a breeze or any way to cool off, had a headache, and was exhausted to the point of falling asleep in anything with an engine (I felt like Rip Van Winkle's intrepid cousin, snoozing my way around the Middle East).

My discomfort was acute but purely physical until a group of women passed in front of my taxi. Each one was completely covered from head to toe in a black veil, long coat to the ankles and buttoned to the neck, stockings, and black gloves. They were crossing slowly with linked arms, probably to catch each other when they would eventually pass out from the heat. And it isn't even summer yet!

I saw the city with new eyes. All the women who were previously exotic and following social norms of a patriarchal society were now walking manifestations of suffering in black cocoons of sweat and oppression. Call me culturally insensitive if you want, but there is something wrong with a society that encourages or even condones women to live in extreme discomfort for the so-called moral safety of men. It is actually sickening to see, especially in the throes of heatstroke. 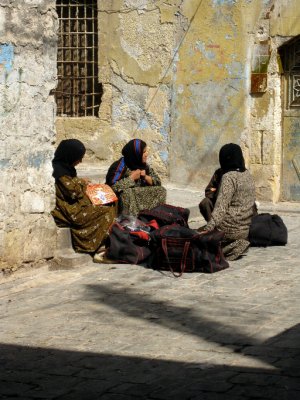 As I sat there full of pity for those women I had a flashback to a few days prior in the inner court of the Grand Mosque. I had been visibly uncomfortable in my rented KKK-in-pinstripes cloak that we had to rent to enter and a sassy young girl remarked, Welcome to my world. Instantly I had images of doing just that, and how joyless my life would be. I will never forget that, nor my how incredibly lucky I am to hold a Canadian passport! As soon as I get home I am going to straight to the beach to comfortably wander around in my bikini because its fun and I can - and it is going to feel AMAZING. 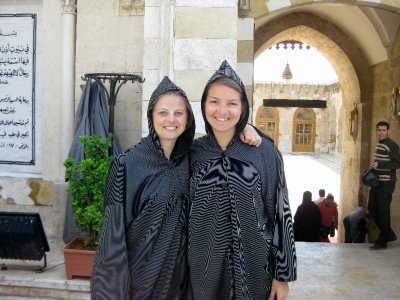 But ok, there are covered Muslim women all over the Middle East, some with much worse situations than in Aleppo. I am giving the city a hard time and that is not fair because it was very charming and definitely one of the most interesting places I have ever been (see http://leillac.travellerspoint.com/19/). Back to the happy posts, thanks for listening!

Your blog made me cry. How horrible, comfort was something I had never considered. I was always so caught up in the opression.