Fact: Humans love to define things. Relationships, jobs, countries, movies, personalities - we categorize everything and it makes us happy. That is why Istanbul is such an anomaly: it is both developed and impoverished, rich and poor, liberal and conservative. These subtleties can be boiled down to one singular contradiction: this metropolis is both European and Asian, and it changes every day. For example, today was a particularly Asian day, the result of which is the upside-down tulip on my head. But I will get there.

Since I arrived here at the end of January the part of my brain that defines things has been short-circuiting trying to figure this city out. I would spend a day wandering the cobblestones of Tunel on the European side and feel certain that the city is European. Small cafes, expensive bars full of beautiful people, high fashion, folks speaking European languages, boutiques of every single expensive designer I can think of (which actually does not say a lot as I don't know many!), Burger King, Starbucks, etc etc etc - everywhere you look the charm and hustle and bustle of Europe is visible. Those are good days, the days when you are convinced that people are truly good and the glass is half full. I love going to the European side for the rush of 'this is SO AWESOME' that hits unexpectedly. Common triggers include the fishermen on the Galata Bridge, Istiklal by night, and stumbling upon the Galata Tower while meandering through the winding streets in Beyoglu.

Then there are Asian days, marked by language-based misunderstandings and otherwise known as 'school days.' I spend an hour (each way) on a crowded city bus heading to and from the easternmost edge of the Anatolian side of Istanbul where my university is located. Every day the bus is packed with people, some of whom have yet to learn the merits of personal hygiene, and grinds through honking exhausting swerving budging nerve-racking traffic. At first I loved it because the chaos and sweet smell of diesel exhaust reminded me of my trip to southeast Asia, but I'm over that now. Now I just fight the feeling that I'm choking to death in a big, stinky sardine can. School days are spent at Yeditepe trying to navigate campus and the cafeteria with nothing but Turkish spoken or written anywhere. Ironically its reputation is that of one of the best English universities in Istanbul. I think not! Anywho, these days are slightly more trying than days on the European side, and the chaos of the bus and disorganization of school often has my glass half-empty by the time I return home.

Living in Moda, though, provides a lovely mixture of Asia and Europe. My neighbourhood is quiet and residential with the sea one short block away, including a running track along the Sea of Marmara with views of beautiful keetans and the Princes Islands. Heaven! The Kadikoy street market is a 5 minute walk away and full of fresh veggies, fish, olives, cheese, flowers, soap, coffee, dried fruit - it's like Granville Island on speed. Then the Rexx movie theatre, Mango outlet, and Bar Street are just a few minutes past. People speak enough English for my purposes and don't try to rip me off as earnestly as they do on the European side, but if that's where my mood takes me the ferries are also less than 10 minutes away. I love my little EurAsian village!

Today though, my village was hilariously Asian. I had to pick up my student buss pass (which loyal readers will recall was first attempted on my birthday aka my worstday) and get my hair cut. Once I successfully got to the bus pass building during working hours all I had to do was drop off a form and 5 Lira then wait for my card to be made, total time: 8 minutes. Somehow in this time I managed to strike up a conversation with the family beside me who spoke no English but thought I was hilarious. Once their laughter subsided into smiley blinks the man on my other side took me under his non-English wing so I would not mess up the complicated process of sitting and waiting. He thoroughly explained that I had to sit, which was impressive as it was all communicated with gestures and finger-pointing. I think I freaked him out though because I got up to offer my seat to an older man - that was not in my instructions! Clearly I was a live wire in need of assistance, so he got up and waited with me then walked me all the way back to Kadikoy. I must appear really incompetent in this country.

On the walk we literally had nothing to talk about as neither of us spoke each others language, which of course made it hilarious. I have no idea what the heck he was talking about, but he chatted and gesticulated away, laughing and sometimes pointing at me then laughing some more. He could have been saying anything. I thought for a while he was telling me about how beautiful his wife was (relief! he's not a creep!) but then he said 'donar kebab.' What rotating meat has to do with his wife, I have no idea, but I went with it. The whole experience was so bizarre and funny that I accepted his invitation to go for cay. We sat there for about 15 minutes. How absurd! We were out for tea and couldn't communicate at all! Finally we figured out a fun game of pointing at arbitrary things and saying they were nice. Flowers - guzel. Tea - guzel. Mosque - guzel. Weather (pointing up) - cok guzel. Alas all random things come to an end and we parted ways soon after. I bid him adieu and escaped into the crowds after he asked for my phone number as I don't think his donar kebab would have approved!

On my wander back home I stopped in a bakery to check out the goods. Quickly recognizing my blank stare, an English-speaking baker was summoned and easily sold me on a traditional Turkish dessert. He described it as similar to a cake, but smaller and harder. It was chocolate and covered with slivered pistachios. I eagerly asked for one, justified it as a cultural experience, and soon found myself eating a chocolate pistachio cookie. Dammit! Totally fell for it.

Last on my to-do list was my hair. I was in dire need of both a cut and colour, but terrified of the dye job. You would be too if you could see the number of dye-disasters walking the streets. From the back girls look like pumpkins a few weeks after Halloween: brassy, dark orange, and frightening. I will pay any amount to avoid looking like an accidental jack-o-lantern so decided to go to an expensive Western kuafor this weekend. Today my task was just a cut, so I chose the salon at the end of my block. Following the theme of the day, no one working in the shop spoke a word of English so I showed them what I wanted with magazines and standard miming of the words 'little' and 'cut.' I think the cut itself is good, but the blowdry is straight out of That 70s Show! Is the curl-out coming back or did they play a joke on me? Kudos if they did, I can't stop laughing! I have an upside down tulip on my head! 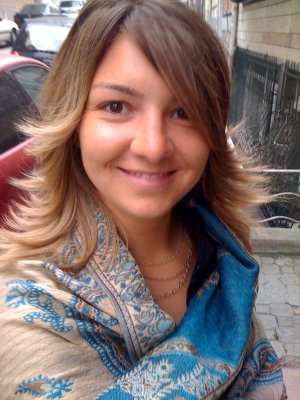 What better timing to meet Vero and her friends tonight. I really hope my recent flashee is there because I will undoubtedly impress them all as a true ambassador to my hood, complete with bizarre Asian hairstyle.

Bug...
I have so much catching up to on your fascinating and hilarious adventures! I have just returned home after many of the same misunderstood communications and look back on them fondly

I Miss you but love getting these glimpses into your life...
talk soon,
xoxo

Lovely haircut Bug! I like it, but then I always did like Farah's hair. It's so like you to make friends while engaged in the complicated process of sitting and waiting. Love your posts, love your writing